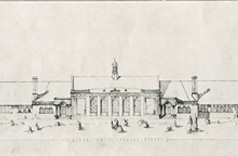 A deposit was paid on 10 acres of land in Glenview Estate, North Essendon, for a new school site. The area bounded by Grammar Street, Collegian Ave and Bournian Ave would cost a total of £8000 and would allow the School to expand its numbers and for those students to enjoy expansive playing fields.

The caption for the architectural sketch in the 1927 Prospectus lists it as, "A proposed design for the new school, drawn by Mr L Cahn. The school will be situated in a fine area of 10 acres near North Essendon Railway Station."

Little did they know that they were on the verge of the Great Depression with tough financial times and falling enrolments. By 1933 the Principal, Mr Gresham Robinson, had agreed to a merger with Northern Grammar School to form Essendon Grammar School. The new school opened at the Northern Grammar School site in Raleigh Street, Essendon, but with the hope of future developments at the Glenview Estate site.

Unfortunately the trustees of the land, St Thomas', were not so inclined and, after a favourable decision in the Supreme Court, sold the land in November 1939, the proceeds going to "the Church of England Trusts Corporation to support Anglican education." [Ref: PEGS: A History, by Victoria Peel, p.112]

Back to School Archives Go to Next Archive